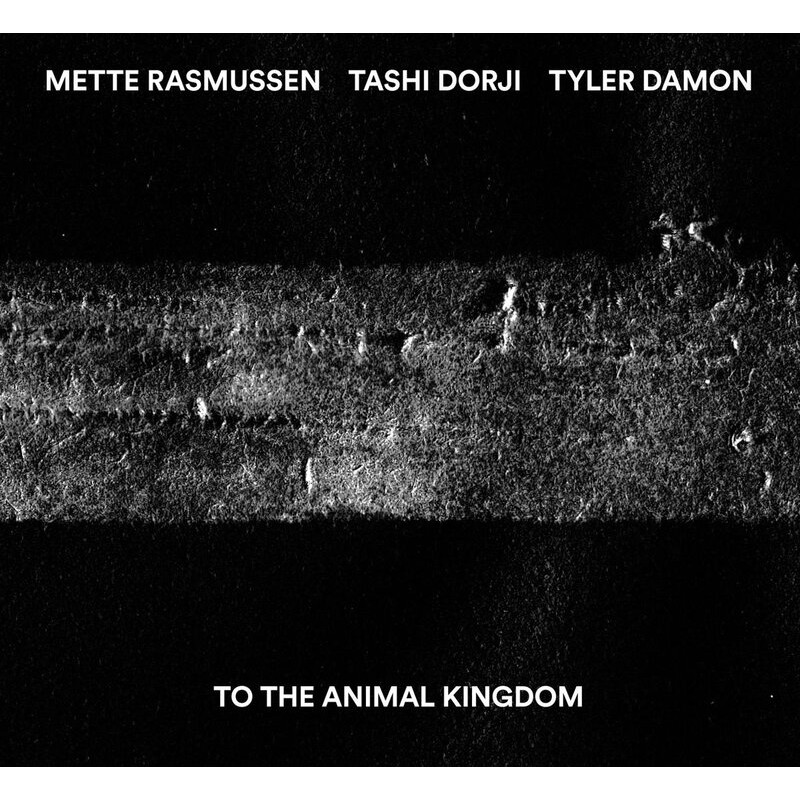 freejazzblog.org * * * * 1/2:
In 2015, Mette Rasmussen and Chris Corsano released one of the best albums of the year. In 2016, so did Tashi Dorji and Tyler Damon. What made All the Ghosts at Once (Relative Pitch) and Both Will Escape (Family Vineyard) so powerful, in part, was the fresh, fluid energy with which each half-drums duo improvised. Nor did either album take the risk of over-relying on its audience’s powers of attention, choosing instead to grab hold of the ear and lead it on irresistibly. As organic and necessary as these musical dialogues seemed to be to the musicians involved, they were like oxygen to their listeners—easy to take in, hard to do without.

So when To the Animal Kingdom was announced, it was only natural to wonder how these two great duos would survive colliding together. Reconfigured as a trio (it’s tempting to imagine what we’d hear were Corsano on the recording) the saxophonist, guitarist, and drummer come together in a way that epitomizes John Corbett’s description, in A Listener’s Guide to Free Improvisation, of what happens when a group of two improvisors becomes three: “Take the duet and add an X factor.” But that’s not to suggest that Rasmussen’s contributions feel “added” on to the existing Dorji/Damon duo dynamic. In reality, any one of the three can be heard functioning as that triangulating “X factor” at any given moment. In this way, in Corbett’s words, the “possibilities” multiply “exponentially.”
For one obvious example, the title track opener finds Rasmussen and Dorji engaging in a kind of high-intensity joust for almost a minute before Damon enters the fray with abbreviated tom rolls. From there he continually shifts the collective dynamic, adding density, volume, and color to escalate his playing as if to drive a wedge between his two companions—or between us and them. When he tapers off in the middle of the track and again closer to the end, he pivots the context in a way that the trio formation, per Corbett’s “X factor,” is especially primed to benefit from.

Another of Corbett’s comments—that “the trio has an approachable level of complexity”—proves true here, too. As with much free improvisation, part of this complexity comes from the musicians’ playful take on their roles in the trio. While he can certainly pummel and thrash the kit, Damon can also bring a sometimes delicate melodicism to his drumming, the chiming gong-work that opened Both Will Escape in evidence near the beginning of “To the Heavens and Earths.” At the same time, Dorji and his metallic tone tend often toward the percussive, whether stabbing (as on the first piece) or more intricate (as on the night-music opening of “To Life”). And isolating Rasmussen often reveals an amount of repetition in her playing that’s surprising, given the overall effect, balancing lyricism and rhythmic patterning.

The result is sensitive but athletic improvisation that has the flexibility to pull in multiple directions at once without violating the boundaries of the three improvisors’ distinctive voices, at times no doubt approaching, to borrow once more from Corbett, the level of “sublime communication.”
By Eric McDowell

Music and More:
"Mette Rasmussen is a Danish alto saxophone player currently making her base of operations in Norway. She builds off of a wide range of influences, and demonstrates all of them on this album moving from free jazz to abstract soundscapes with equal facility. This is a very exciting album with Rasmussen joined by Tashi Dorji on guitar and Tyler Damon on drums, beginning with To The Animal Kingdom which plunges right in at the deep end raw and guitar and saxophone met by pummeling drums.

The music is very exciting with blistering shards of guitar sparking off against gale force saxophone and drums. Rasmussen has a very raw and appealing tone to her instrument, playing with a heart on her sleeve emotion that is very powerful, and leads the group into some over the top full band interplay. Torrential sounds burst forth with deep and guttural saxophone illuminated by flashes of guitar and the epic rhythm set of the drums. The trio breaks into a section of uneasy calm, as if pausing for breath before long tones of saxophone branch out and begin to howl as the maelstrom returns and carries to group to the conclusion.

"To Life" is the second track and there are raw scrapes of guitar and ominous breathy saxophone meeting choppy sounds to form an uneasy opening. The group coalesces into a tight organic unit that builds the volume and intensity back up with thrashing drums and frantic morse code sounding notes from Rasmussen's saxophone, segueing into a thrilling collective improvisation of all out passion from the three musicians. This massive twenty minute plus track is consistently engaging due to the dedication of the musicians to ceaseless exploration, building to a full on assault with deep rhythmic drive underpinning the proceedings. The music opens up to evolve into a spacious section that is yearning and present, creating interesting textures as they build back up to the end of the track, playing with urgent physical power.

The final track, "To the Heavens and the Earth," begins with pointillistic guitar and low tones of saxophone and percussion. They develop scratchy music that gradually folds in some more harrowing sounds that unite the group into a cohesive whole. The volume increases as great slabs of sound are conjured with blustery saxophone leading to a scalding trio improvisation. Bleats of saxophone with choppier guitar and drums lead the music into a more open and abstract section, with subtle saxophone framed by spacey and haunted guitar and drums that gradually build in as the track concludes.

This was an excellent album of very exciting free jazz, with three very talented and focused musicians meeting on common ground and creating spontaneous and powerful music."
by Tim Niland

TASHI DORJI
Tashi Dorji grew up in Bhutan, on the eastern side of the Himalayas. Residing in Asheville since 2000 and soaking up a vast array of music. Along the way, Dorji developed a playing style unbound by tradition, yet with a direct line to intuitive artistry. His recordings feature improvisations that spasmodically grow along tangential, surprising paths. All references break loose during a composition, as Dorji keys into his own inner world. After a handful of releases on various labels since 2009, Dorji presented his debut LP on Hermit Hut, the label created by Ben Chasny (Six Organs of Admittance) in 2014. Since then Tashi has released music in various formats on labels like Bathetic Records, Cabin Floor Esoterica, Blue Tapes and Marmara Records.

METTE RASMUSSEN
Mette Rasmussen is a Danish saxophone player based in Trondheim, Norway. She works in the field of improvised music, drawing from a wide range of influences, spanning free jazz to textural soundwork. Rasmussen works on exploring the natural rawness of her instrument - experimenting on what the saxophone is capable of in sound and expression, with and without preparations. Much in demand, she has performed with the likes of Alan Silva, Chris Corsano, Ståle Liavik Solberg, and with her Trio Riot group with Sam Andreae and David Meier.

"Mette Rasmussen has a remarkably fluid and expressive tone on the alto saxophone. Her playing at times evokes the rich, heavenward clarity of Albert Ayler, at others the throaty roar of Mats Gustafsson. Equally, though, she’s able to sidestep these influences and assert her own individual sound in piercingly high tones and controlled outbursts of free playing." - Viennese Waltz 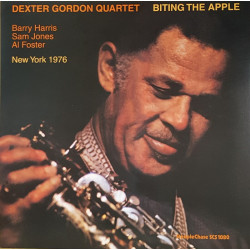 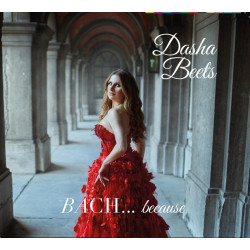 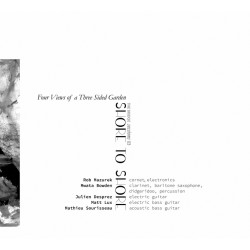 Four Views of a Three Sided...