opis:
Editor's info:
The real "news" has less to do with Berlin, proper, as the particular sensitivities of musical dialoguing between these players. Lines of communication are especially open here, in that the players are comfortable with the leanness context yet always suggesting more expansive thinking. And for all the spurts of virtuosity, individually and collectively, much of the expressive language here emerges out of roads not taken: the pair interacts, but often on parallel paths, avoiding predictable modes of musical conversation, they work with density and shapes as much as lines and rhythmic waves, and they sometimes opt for space-as-content. Takase, a Berliner by way of the USA and her native Japan, is happily ensconced in her adopted hometown. Still, inflections of her Japanese musical thinking comes through, as well as her lineage as a koto player, bringing a crisp, percussive attack to the piano, even when her intent is to create swiping brushstrokes on the instrument. In some moments, Akase's acute sense of time is reminiscent of the piano player studies of Conlon Nancarrow, balancing rationality and floating dreamtime. That character, of angularity and spaciousness behind the intensity, bodes well for Bauer, whose technical prowess and wisdom are smartly framed and answered here. The musical turf is willfully varied, from the frenetic pointillism of the opening improvisation to the contrasting second track, the pliable Takase original, "Removal." A squirming left-hand piano riff and a joyful little trombone melody weave in and out of abstraction. News from Berlin is good news, indeed. It suggests a broadening of perspectives, but also a focused devotion to artistic values arrived at through long consideration of what music means to these players. Though each musician is boldly singular, some third voice enters into the picture when they engage in dialogues together. And in the end - as with all good duets, relationships, and other partnerships - it is that ineffable third voice that crystallizes the unique character of the two. Josef Woodard, March, 2002 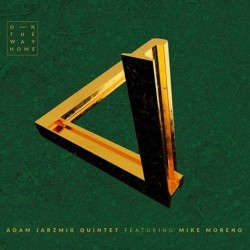 On the Way Home [Vinyl 1LP]