opis:
Editor's Info:
The Abbott & Costello Show marked the last major commercial success for the comic team of Bud Abbott and Lou Costello. The duo, who had started out in burlesque in the 1930's (and each had long experience in entertainment and performing before they met), had been a veritable fixure on radio since 1938, when they'd appeared on The Kate Smith Hour, which led to work on Broadway and more radio work in 1940, initially on a summer replacement show for Fred Allen, and later with their own shows on NBC and, subsequently, on ABC. It was on the radio show that they assembled the core cast of performers, regulars and bit players, who would later work in their movies and the subsequent television series -- first and foremost among these was Sidney Fields, who would contribute to some of their early movies as a writer and bit-player, but the other important names were Iris Adrian and Elvia Allman, both of whom would later turn up on their television show. Their radio show continued into the start of the 1950's, and overlap with their film career, which began in 1941 -- up thru 1950, the films were immensely popular and profitable. But their film audience had begun to decline with the start of the new decade, and during this same period it became clear that radio had seen its day as the dominant broadcast entertainment medium. The duo began looking at television as the next stop for their careers, and made the jump to the small-screen in 1951, initially as guests on The Colgate Comedy Hour, which was successful enough so that a regular television series seemed a real possibility. That became a reality in 1952 with the first season of The Abbott & Costello Show, which went on the air on CBS in December of that year. Produced by Costello's brother Pat Costello, the rotund little comic had an ownership interest in the program, whereas Bud Abbott, unsure of the future of television, chose instead to take a larger straight salary, with no longterm interest or ownership stake in the show. The show was shot and produced at Hal Roach Studios in Los Angeles, using the same sets that were used (at the very same time period) for the Amos 'n Andy Show. The first season of The Abbott & Costello Show was formatted very loosely, and opened like a stage revue, with the two comic stepping out on stage and addressing the viewing audience, and doing some schtick, which might range anywhere from a few seconds to several minutes -- in the very first show, "The Drug Store", Costello tries to tell a fish-story to the audience in spite of Abbott's constant, brilliantly timed interruptions, which culminate with the little comic stalking off-stage, thwarted and dejected, in the very next scene, in the "story" proper, Costello is walking down a street when a woman approaches him, says, "How dare you remind me of somebody I hate!" and hits him on the head with an umbrella . . . and so it went, in 26 programs done that season in which the barest plot elements often gave way to screamingly funny digressions, leaving any semblance of story arc in the dust. Often scenes and plots were merely set-ups and excuses for the duo to do one of their classic burlesque, vaudeville, or radio routines, of which the most famous was "Who's On First," in which Abbott tries to tell an increasingly frustrated Costello the names of the member of a baseball team ("Who's on first, What's on second, and I Don't Know's on third . . . . ") -- others were "Niagara Falls" (aka "Slowly I Turned"), "Mustard," "Hertz U Drive," "Susquehanna Hat Company" (aka "Bagle Street," aka "Floogle Street," a sketch that veteran comic Joey Faye claimed authorship of), and "Jonah and the Whale." There were literally dozens of such routines, and they were all used liberally in that first season. Indeed, one episode, "Getting A Job", seems to have been assembled from random pieces of footage, without any continuing plot at all and none of the pieces of footage really relating in anyway to those around them.
SHADVD402 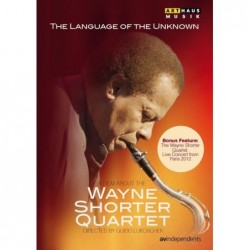 The Language of the Unknown...

A History Of The Jewish In...