opis:
Liner Notes:
Just out is this sparking new release from the supremely talented Danish musician, writer and singer Mike Andersen, who follows up his equally-fine “Echoes” album with a genre-straddling eponymous effort . . . . as ever with an Andersen release dipping into blues, classic soul and funk . . . and in the company of a fine and sympathetic group of musicians.

Recorded on home territory at Aarhus in Denmark back in 2011, the tracks have taken a while to see the light of day, but let’s be thankful they have! As well as Anderson on guitar and vocals, the band is Johannes Noerrelykke (guitar and backing vocals), Kristian Fogh (keyboards), Kristian Kold (bass) and Jens Kristian Dam (drums), with some extra help on backing vocals and horns from a host of musicians.

Proceedings get underway with the uptempo and funky “I Wanna Go”, with an almost spoken vocal from Mike Andersen and some piercing guitar – a most splendid opener! The following “Between Love And Dawn” is a laid-back ballad of seduction and romance, penned by all the band, next-up is the smooth, swinging and jazz-grooved “Hey Baby, with a co-vocal from Nicole “Nikki” Burt and more tasteful guitar interjections from Andersen.
The soulful ballad “Run As Fast As You Can” is a standout on the album, with vocal from the heart and lovely piano from Kristian Fogh, a beautiful track, the uptempo “You Don’t Need Me” has a dance floor-Motown feel to it with female backing vocals and it fairly rattles along. The band hit another soulful and funky groove on “Is It All Gonna Be Ok?” . . . again topped with a lovely warm Mike Andersen vocal.

The bluesy “Still Drinking” rides on some spiky guitar and the band are locked tight – indeed, as they are throughout – with the embellishment coming from the keyboards of Fogh. The only cover present here is a really nice take on George Harrison’s “Something”, complete with the trademark ‘weeping’ guitar from the original – it features the horns of Rasmus Boegelund (trumpet) and Niels Mathiasen (saxophone).

This most enjoyable and highly recommended release from one of Europe’s major talents comes to a soulful and funky closure with the excellent “Play With Me”, lots more great grooves, that seem to be sadly missing in lots of today’s musical outputs . . . but not from Mr. Andersen and his excellent band.
by GRAHAME RHODES
NORDIC117

Is What It Is 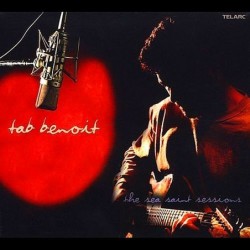