opis:
Editor's info:
Samba is Brazil’s cultural stamp, recognised the world over as the swinging dancing rhythm that represents the South American nation. Samba is a flexible form that is interpreted anew by every generation and clique of artists. This Rough Guide charts the dazzlingly diverse sounds of samba.

The contribution of female sambaista’s to the form is referenced by the inclusion of Alcione, the foremost of the older generation, with a regal stage presence and a thunderous voice. Also heard is Marisa Monte, the most successful Música Popular Brasileira (MPB) vocalist of the last decade or more. Her repertoire considers many styles but never neglects her first love, samba. Mart’nália brings a distinctive African feel to her music, and leading young sambista Teresa Cristina nails traditional favela sambas perfectly.

The traditional-revivalist thread of samba is represented by two groups and two solo artists: Samba Urbano clip along at double-time with an elegiac, flute-led piece, Partideiros Do Cacique bring Rio Carnival to the studio, Moyseis Marques’ minor-key samba expresses a whole spectrum of emotion and Luísa Maita’s ‘Lero-Lero’ is pure samba.

For the club and dancefloor there’s newcomer Odilara, the welcome return of prodigal son Roge and soul sensation Márcio Local, all bearing the irrepressible hallmark of classic samba-suingue with killer horn arrangements. And finally, for good measure, we have Samba Um, with their tale of the malandro from Porto Da Pedra, a famous favela in Sao Gonçalo District, Rio.

The bonus disc is a full album from accomplished sambista Ruivao, an artist with a mid-range voice that flows from silky tunes to fast tongue-twisting tempos with ease.
If 36-year-old Ruivao sounds like a fully formed sambista already, it’s because of the wealth of experience that this multiinstrumentalist has crammed into his career so far. Whilst working Lapa’s top live music venues nightly, Ruivao’s warm and welcoming tones can be heard voicing over TV and radio commercials for Coca-Cola and Guaraná. Ruivao cites his greatest influences as samba and Afro-Cuban music.
RGNET1289CD 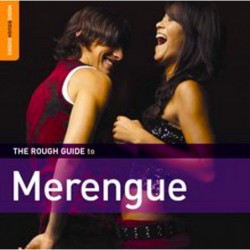 The Rough Guide To Merengue