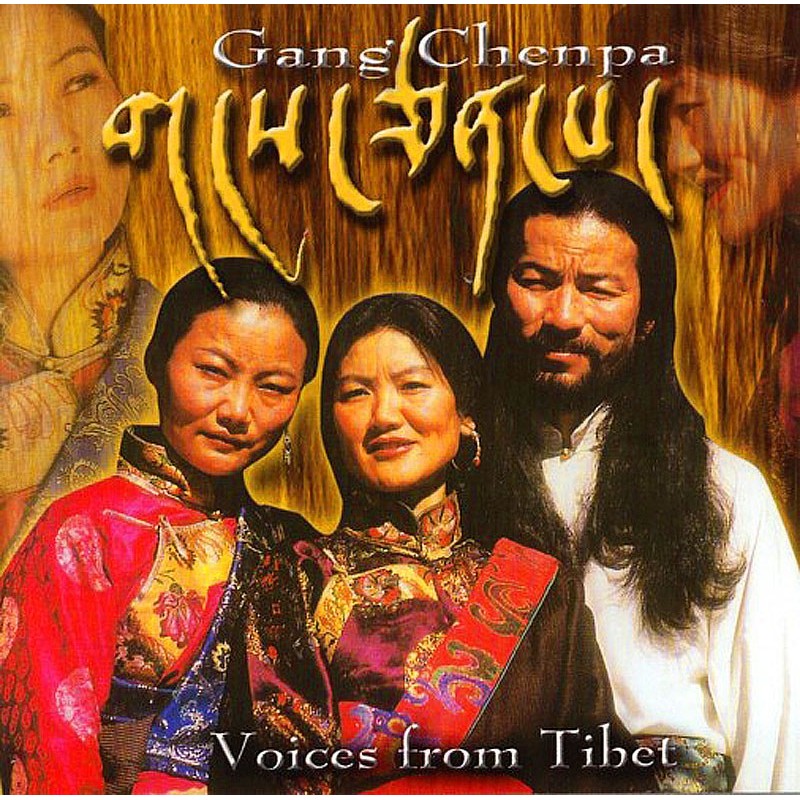 opis:
Editor's info:
Tibetan Group Gang Chenpa consist of Namgyal Lhamo, Chukie Tethong and Tobden Gyamtso. Namgyal Lhamo and Chukie Tethong are sisters as well as former artist at the Tibean Institute of Performing Arts.
Their first CD is titled Voices from Tibet and is released to celebrate the 50th Anniversary of His Holiness the 14th Dalai Lama assuming Temporal Authority.
Pure and pristine, just the way it had always sounded in Tibet, until fortyyears ago. That is how Namgyal Lhamo, Kelsang Chukie Tethong, and Tobden Gyamtso from Gang Chenpa - 'People from the land of snow' - wishto sing.
In present-day Tibet that would be virtually impossible. Forty years of Chinese rule have certainly left their marks. As a result, the traditional Tibetan repertoire in Tibet itself became obscure overnight. The generations that have grown up in Tibet in the last few decades no longer know these traditional songs and fewer people stillplay the traditional instruments like the dragnen - the Tibetan lute and the gyumang - a multi-string hammered dulcimer.
Gang Chenpa is a group of Tibetan singers living in exile. The two sisters Namgyal Lhamo (1956) and Kelsang Chukie (1957) completed at anearly age an arduous musical training course at the Tibetan Instituteof Performing Arts (TIPA) in Dharamsala, India. They were destined to become major performers of traditional Tibetan music, but they still had a long way to go.
Tobden Gyamtso (1964) roamed the roads and villages of the Tibetan countryside as a child, living off his great talent for singing thegyae-sar - ancient Tibetan legends. In the late eighties he became involved in the demonstration movement against the Chinese oppression. In the early nineties he was shown a series of photographs of the Tibetan community in Dharamsala. This prompted him to devote all hisenergy to supporting the cause of his own people. He set out for Indiaon foot, reaching it a month later, singing all the way.
Namgyal, Chukie and Tobden met in 1996, in Argentina, during the shooting of Seven Years in Tibet. In some scenes in this film their singing can be heard in the background. During the long period theywere in Argentina, with many hours spent waiting between takes, Namgyal, Chukie and Tobden gradually found they were kindred souls.
All three of them wish to keep the traditional Tibetan music alive. They sing and play light-classical Tibetan songs as they were performed during festivals and parties - but also love songs, mountain songs, and songs that people used to sing while working in the fields or in their workshops.
They learnt their songs and singing techniques from people who, back in 1959, were still able to sing freely. In Dharamsala they were taught by legendary teachers of Tibetan traditions, like the singing masters Lhutsa and Majalhama, both dead now.
On this album they sing and play like they would on the stage - with outany double recordings of voices or instruments. When singing they perform the same ritual dances as during an actual stage performance - you may not be able to hear it, but it does show in the phrasing, in the emotion conveyed by their songs, in the depth of their music.
Both sisters have performed at the Tibet Freedom Concerts in New York, and in March and April 2000 they will play a series of 15 concerts in the biggest Dutch theatres.
The interest in Tibet has increased tremendously over the last few years, particularly in the West. Surprisingly thus far hardly anyone had ever put the pure, genuine, traditional Tibetan music on cd. Gang Chenpa has succeeded in filling this gap quite convincingly.

Jewish Songs from the...