Editor's Info:
Brooklyn's Baby Dayliner is upbeat and joyous, earnest and romantic, all at the same time. "Right smack in the depth of your soul you'll find a core the purity of which is begging to start you from the front," he sings. "Fun funny, it's funny, a raid on your heart! Fun funny, it's funny a raid on your soul!" Imagine these lyrics, sung in a melodic monotone and laid over a series of wooshing and plinging synths, trip-the-light-fantastic pianos, and catchy beats. What you'd have is a true 21st century entertainer, a new wave Frank Sinatra: Baby Dayliner.

Filter
There's somethin' just indescribably cool about having the keyboard as your most trusty instrument. Twiddle all the electro-fuzz that you want, or go town on the rotating voices effect, trying your darnedest to fuck it all up, and you're still left with a steady strain of open-faced melody. Of course, it also helps when you're blessed with Baby Dayliner's Ian Curtis-meets-Tom-Jones voiceover to keep everything from splattering together and making us think it's electroclash gone awry (again). In fact, to label High Heart and Low Estate as anything at all would be to misrepresent its manifold influences -- the deceptive coyness of Ben Folds in the opener "Raid!," the Belle & Sebastian wistfulness of "Madeline," and the Streets' perverse street wisdom in "Hoodlums in the Hit Parade." He does spread himself a bit thin over 12 tracks with no discernable continuity, but the slicker-than-Rick barbs and surprisingly understated insights tell me that here's a man who has no problem with the piano being mightier than the sword. Because really, what's the use of a sword without rapier wit. Rating: 83/100

Wallpaper Magazine
Imagine if fate had been kinder and Ian Curtis was still with us and recording with Money Mark, producing low-fi paeans to the everyday struggles of life and love writ through with a wry irony. A crooner for our times, Baby Dayliner's monotone voice and cranky instrumentation belies a hopeless romantic who would make Serge Gainsbourg and Leonard Cohen smile.

Uncut profile by Julian Poidevin:
ALL SINGING, ALL DANCING?
What is this, The Kids From Fame?
Funny you should say that. Twenty-seven year-old Ethan Marunas studied at LaGuardia High School, on which Fame was based. Still, our boy didn't spend his days decked out in fluorescent leg-warmers and rainbow braces practising his high kicks. Something of a musical prodigy, he was all set to become a concert violinist before turning his back on the life of a classical musician at 17 to pursue a path that would eventually lead him to his current guise: modern-day crooning sensation Baby Dayliner.

A crooner, eh? Tuxedos, 30-piece orchestras, that sort of things?
Hardly. The Baby Dayliner live experience consists of nothing more than one man laying down his deep, hypnotic voice over the pre-programmed beeps and beats of his "Dr. Rhythm Section" synth. Think Leonard Cohen experiencing an epiphany on the floor of the Hacienda in the acid summer of 1988. Or perhaps Morrissey having his heart broken at a Run-DMC show.

Why the entirely solo approach - wouldn't he be better off forming a band?
"Don't we all want to go solo?" he muses. "To be the sole auteur? You can probably write far better songs that way." That seems to be the case on his splendid debut, High Heart and Low Estate -- a retro romo romp through a New York ghost world that is neither the drainpipe-and-denim sweat pit of CBGBs nor the mirrorball glitz of Studio 54 but somewhere in between.

Tell us more.
"New life is breathed into New York every second of every day. I have 10 stories per inch of every block in Manhattan, and with those stories are 10 different emotions." So it goes that Marunas can drop in lyrics as ingeniously poignant as "the sad songs I love -- they don't love me back" (on the maudlin "Can't Believe") while the perfect pop kiss that is "Raid!" intriguingly suggests how Lowlife-era New Order might have sounded if Ian Curtis had lived to front the band.

A performer in the Curtis tradition, then?
"A critic went so far as to say that I try to emulate Curtis's stage persona, which is total bullshit," fumes Marunas. "Curtis's style was spastic, and that's fine, that how he expressed himself, and he rocked it. But gimme a break -- that's one bloke whose dance styles I'll never copy!" Truly, this man is a one-off.
HWY006 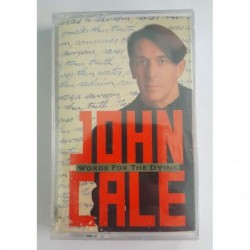 Words For The Dying [Music...