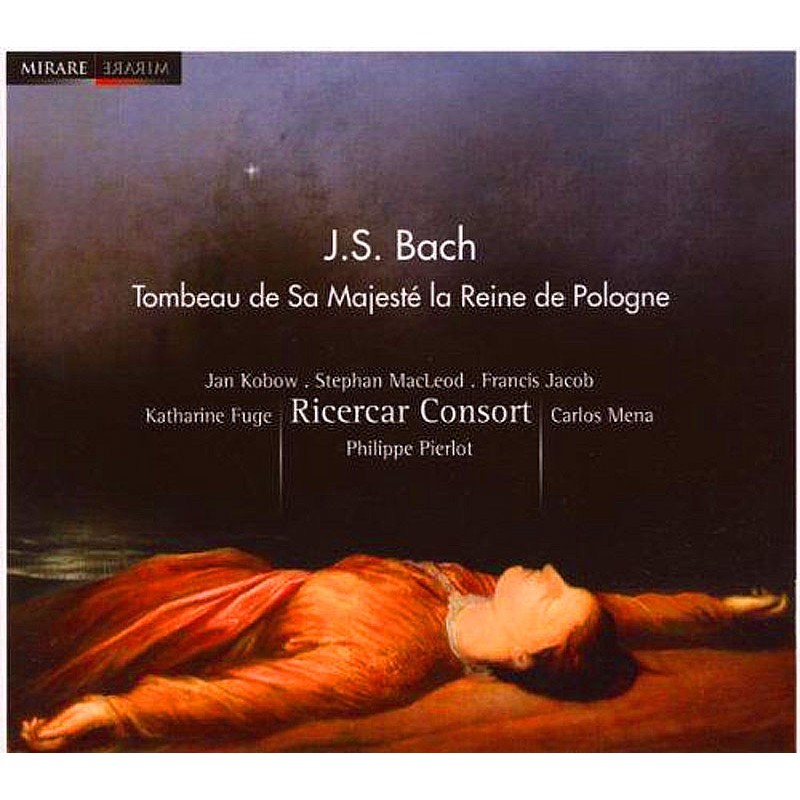 Muzyka Barokowa
premiera polska: 10.05.2007
kontynent: Europa
opakowanie: digipackowe etui
opis:
BBC Music October 2007 - * * * *
“Pierlot has already proved to be a sensitive and stylish Bach interpreter and in this recording his musicians illuminate Bach's textures with elegant phrasing and a pleasing balance between voices and instruments.”


The Gramophone Classical Music Guide 2010
“Rather gentler than the reconstruction culture of recent years, the Ricercar Consort ask the listener to contemplate the mourning for the Queen of Poland, Princess Christiane Eberhardine – in 1727, through a 'funerary monument' conceived around Bach's Trauer or Funeral Ode, the Mass in A major and contemporaneous organ pieces. We have no evidence that the Mass or the instrumental music appeared in the 'catalfalque in sound' (to quote Gilles Cantagrel), the memorial ceremony which occurred a month after the Queen's death and for which Bach was commissioned to write his exquisite Ode, but that is of little matter.
Whatever one's view on single-voiced Bach, the performances here are among the most persuasive in this medium. Philippe Pierlot understands the music from the thorough bass up – which one imagines should be common enough; yet so often a properly directed bass in Bach is traded for contrapuntal panache and facile rhythmic gesture. The Mass may lack a certain dramatic presence in the stunningly original exchanges in the Gloria, reconstituted from Cantata No 67 with its memorable Vox Christi 'scena' of Jesus's blessing bestowed on mankind.
However, the vitality, interest and warmth of the opening, as in all the choruses on the disc, are determined above all by textural definition and characterful instrumental playing, the flutes beautifully appointed throughout.
The Ode is a remarkable example of a Bachian synergy between a carefully selected palette of light pastels (lutes, gambas, recorders, oboes d'amores and strings) and a melodic flavour and nostalgic intensity drawn from a Passioninspired language, ideally crafted around the Enlightenment poetry of the young Leipzig humanist, Johann Christoph Gottshed. Its unique atmosphere is captured here, though as so often in single-voiced readings, the solo voices don't always have as much to say out of the collective realm. Francis Jacob's organ playing is both searchingly fluid and articulated.
With the odd misgiving, this is a compelling and instinctive new Bach recording.”

Gramophone September 2007
“Whatever one's view on single-voiced Bach, the performances here are among the most persuasive in this medium. Francis Jacob's organ playing is both searchingly fluid and articulated. With the odd misgiving, this is a compelling and instinctive new Bach recording.”