opis:
Editor's Info:
Breathe, and you know that you are the world.

Different Rivers marks Norwegian saxophonist Trygve Seim’s emergence from the ECM wings as a leader in his own right. Well versed in the label’s vital documentation of European improvising (not least of all through his life-changing tenure with Finnish drummer Edward Vesala), Seim draws upon those influences to pool his talents for the present disc, which deepens the free spirit of his so-called Trondheim Kunstorkester. Trumpeter Arve Henriksen—notably, a close associate of Christian Wallumrod—and a host of Scandinavian talents round out an ensemble of remarkable depth and poise.

Seim’s three duets with Henriksen are the album’s acupuncture points, each a vitalization of the whole. The breathy meditations of “Bhavana” and the flutter-tongued percussiveness of “Between” both spin on fluid axes, but it is “For Edward” that breaks its gravitational ties and flows outward into the universe. Seim’s shakuhachi tone reveals superb control of his reed, a sound honed by oneness with its source. Like two cranes calling to one another in the night, never able to find a way across the Milky Way between them, he and Henriksen paint bridges of artful listening in lieu of earthly travel. Even when they are surrounded, as in the title track, they are ever swimming toward something galactic.

The trumpeter reveals his vocal skills in opener “Sorrows.” In wispy arpeggios he lurks, stranger among a crowd of consenting instruments. The effect is ghostly, sirened by keening higher reeds. With the exception of “Search Silence” (a curious little flicker of geometry), the album’s remainder samples a likeminded palette. The subconscious beats of “Ulrikas Dans” brush on a light gesso for bolder horn strokes. Seim’s piercing harmonics lend an angelic touch, and his tenoring on “The Aftermath” spins a charm bracelet of wispy melodic cells. This life further into the sun-swept plains of “African Sunrise,” giving name to the aching land. Drummer Per Oddvar Johansen’s flint-strikes incite a conflagration in Seim’s playing, ending on scream. I daresay this and “Breathe” are two of the finest tracks in the ECM catalogue. The latter is a mission statement, a parable on the profundity of simplicity. Amid the band’s resonant atmospheres, vocalist Sidsel Endresen recites a powerful wakeup call. She finds a process in every wing-flap, every sprout and blossom, as blurry horn textures translate word into life.

The strengths of Seim’s compositions, and of those interpreting them, lie in their control and dynamic range. Their roots are as deep as their branches are tall, softly aflame with autumnal themes. Case in point: “Intangible Waltz,” which follows Henriksen’s patterns through thick forest and barren field alike. Its central whisperings between drums, accordion, and trumpet work wonders under the microscope. No matter how calm and thin its layers become, it allows visions of a dancing light to seep through.

Seim’s is a viscous music, don’t expect to swing. Meditative and ashen, every track of Different Rivers feels as if it was recovered from the archives of a lost culture, of which only this music remains to represent it. Let the rebuilding begin.
6743545 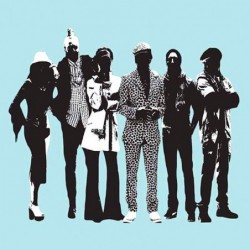