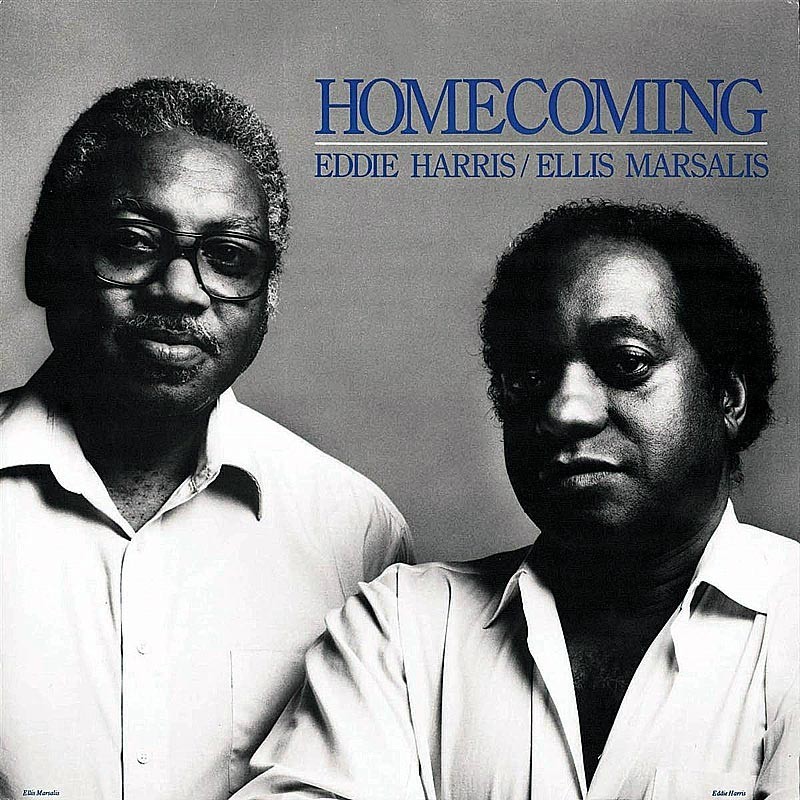 Straightahead / Mainstream Jazz
premiera polska: 2021-05-05
kontynent: Ameryka Północna
kraj: USA
opakowanie: digipackowe etui
opis:
AllMusic:
The original LP vinyl edition of Homecoming on the Spindletop label from 1985 showed Eddie Harris and Ellis Marsalis to be a quite competent and enjoyable pairing. In mixing or matching the bluesy Chicago tenor sax of Harris with the deeply hued and sometimes extroverted modern New Orleans flavors from pianist Marsalis, the two discovered much in common as they played a program of half standards and half originals. This expanded CD reissue includes five recently recorded bonus tracks sans the late Harris, four of them piano duets between the elder Marsalis with protégé Jonathan Batiste, and a trio jam with bass, drums, and Batiste on melodica. From the title track in its sweet waltzing way, to the lugubriously slow, exquisite, and enigmatic '''Deacceleration'' broken up by the arpeggiated piano runs from Marsalis, and the surprising free-form, abstract phrasings of ''Ethereal Moments, Pts. 1 & 2, one realizes this will not be a standard fare, safe program. Not that there's a complete concept of caution being thrown to the wind, as ''Out of This World'' is spiced with New Orleans gumbo and the short ''Zee Blues'' works in up and down tempos with some challenged sax from Harris, but they are rendered pretty much straight-ahead. Jumping into some traditional stride piano during ''Have You Met Miss Jones?,'' Marsalis proves his command of the entire jazz tradition, while his quickened phrases on ''Darn That Dream'' also indicates how he can energize a well-worn melody. Harris sounds a bit flat only in that he lays back more than an equal participant might, taking the music as it comes without pressing the issue. The four hands tracks are good bordering on very good, as Marsalis and Batiste adapt ''Sweet Georgia Brown'' on ''Two Piano Louisiana''', dig into blues nicely for ''Hickory & Cognac Streets'', play a peaceful, languid ballad ''Mind & Spirit'', and combine Latin and NOLA funk for the spirited ''Crescent City Montuno.'' The jam ''Blues at the End of the Session'' with Batiste on melodica, drummer Jason Marsalis, and bassist Jason Stewart is more throwaway filler than memorable track. All in all, this new version of Homecoming might be disappointing due to its lack of alternate takes or previously unreleased material, but the additional music done 25 years later not only adds a new perspective, but illuminates what was originally a worthwhile effort from Marsalis and Harris.
by Michael G. Nastos

Albert's Back In Town

Hymn for a Hungry Nation