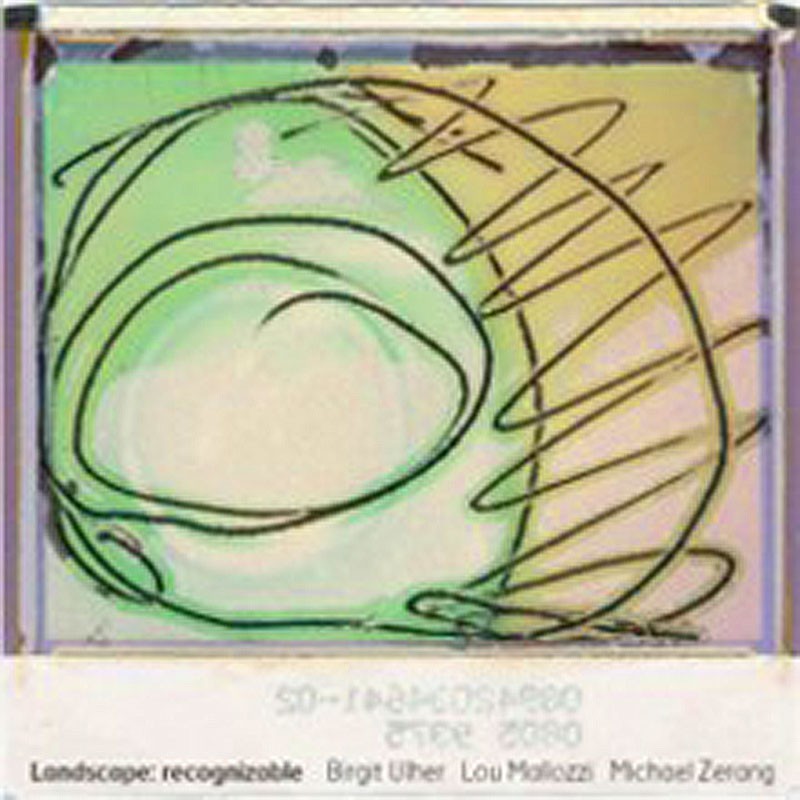 Birgit Ulher plays trumpet again on 'Landscape: Possible' along with Lou Mallozi (turntables, cd's, microphones, organ pipes and amplified voice) and Micheal Zerang (friction drum, wind whistle, xylophone bars/snare drum, bird calls and metal/snare drum). This work was recorded in Chicago in 2004. This is quite a nice, but sort of average release of improvised music with both ties into the 'modern improvisation' and the other being a bit more traditional. Alright. Frans de Waard (Vital)

Hamburg trumpeter and visual artist Birgit Ulher has been involved in free improvising since 1982, developing an extensive vocabulary of textured breath, brassy pops and burbling which is heard in especially sympathetic company on these two CDs.[...]
On Landscape:recognizable, recorded in Chicago in June 2004, Ulher is heard with Lou Mallozzi utilising turntables, Cds, microphones, organ pipes and amplified voice, and Michael Zerang's percussion, whistle and bird calls. Despite the title's suggestion of figurative familiarity this is, like Sputter, a thoroughly abstracted set held together and driven by finely sustained internal tensions and correspondences. Disparate colours and textures are wound and bound together with a strong sense of directedness that never threatens to homogenise. Ulher's personalised style is geared to close collective interaction rather than extrovert flamboyance, and this fine trio recording show well her capacity to integrate very effectively without playing safe. Julian Cowley (Wire)

For years North American improvisers have gone to Europe to play with like-minded musicians, today the traffic is as frequently the other way. Sputter and Landscape: recognizable (both on Creative Sources) are a couple of souvenirs from Hamburg-based trumpeter Birgit Ulher's recent American odysseys that show her interaction with similarly minded Yank music experimenters.
In Europe Ulher works in a variety of international ensembles and seems to have a particular affinity for percussionists. The UNSK quartet, of which she is a member, includes Swedish drummer Raymond Strid, while British drummer Roger Turner is with her in the PUT trio. So it makes sense that on these new CDs she's partnered with two of the United States' most inventive sound-makers, who are also percussionists: the Bay Area's Gino Robair and Chicago's Michael Zerang.
Just as Ulher, like countryman Axel Dörner and Boston's Greg Kelley, is expanding the trumpet's language, so in their own ways are the Californian and Midwesterner doing the same for the percussion family. Listed as playing energized surfaces and voltage made audible on Sputter, Robair uses synthesized live electronics to extend his kit's capabilities. Similarly, Zerang's expanded kit on Landscape: recognizable includes friction drum, wind whistle, xylophone bars, snare drum, bird calls, and metal.
Not that anyone is nonplussed during the course of these improvisations. After all, Robair has matched wits with reed experimenters like Britain's John Butcher and Anthony Braxton, while Zerang has done the same with Butcher and folks like Germany's Peter Brötzmann. Encountering a metal tube with three valves merely calls for different strategies. Expanding the aural panorama on Landscape: recognizable, is the wildcard: Chicago-based audio artist Lou Mallozzi. He adds his arsenal of turntables, CDs, microphones, organ pipes, and amplified voice to the sound miasma Zerang and Ulher create.
In this context, Sputter is practically an acoustic session. From the beginning of the Robair-Ulher meeting thrashing input signals, masticating impulses, and hissing oscillations predominate. But you can still hear the puffs of colored air, spattering triplets, and buzzing lead pipe movement that can only be created orally.
At various times Ulher bubbles near subterranean pedal tones that swell to aviary caws, throat slurs, and eventually piercing shrills-then she adds yelping internal valve lesions. Rubato, often spewing microscopic tones, the trumpeter doesn't neglect flutter-tonguing, tongue-clicking, sudden volume shifts, and mouthpiece kisses. She can replicate the creak of a raising coffin lid to meld with Robair's otherworldly cymbal scrapes, or cackle crone-like to join the percussionist's static tuning actions. For his part, Robair triggers wave forms that can be compared to a pre-recorded tape running backwards, a vacuum cleaner's roar, Morse code, and insistent doorbell buzzing.
On "A Genius of Trunnels", for example, he outputs church organ-like striated tones that finally reveal themselves as cymbal and gong battering, while Ulher explores plunger tones and growls from the capillary valves. Eventually, cymbal vibrations mix with the brassy duplication of distant thunder. On "The Downy Monsters", the longest track, Ulher's near-polyphonic output reaches almost accordion-like compression as air and metal vibrate around single breaths. Completing the impulse as if he too was manipulating another part of her instrument, Robair triggers a complementary pulsating sequence, shoveling and sawing on unyielding hard surfaces.
Similar surfaces get more of a workout on Landscape: recognizable, while the addition of a third sound source makes the session both louder and livelier. Zerang adding aural percussion, plus the pre-recorded voices from Mallozzi's pre-existing CDs, as well as his microphones and amplified voice, give this session more of a verbal quality. Frequently the pre-existing human timbres are mere gibberish, crowd noises, or murky, below the hearing threshold. Sporadically between turntable rumble and mic hisses, however, full words and phrases emerge, though the significance of an announcer intoning "to wait", "now", "listen", or "before" in the midst of a group improvisation is a query best left to Mallozzi.
Notwithstanding this, Ulher's tone appears harsher, more rhythmic and coarser than on Sputter. Sure there are twitters and warbles, but also many more growling wah-wahs, tongue-slaps and stops-the better for counterpoint with Mallozzi's triggered processed sounds plus the bounces, ruffs, and general metrical impetus from Zerang's percussion collection. As someone who can produce resonating tones from hand action on snare tops or floor creaks, Zerang's dexterity makes him the perfect intermediary between the electric and the acoustic impulses of his partners here.
Although Zerang's wind-whistle prowess is no more than serviceable, the chirruping effect-part penny whistle and part bird call-he creates encourages the trumpeter to respond by rubbing textures from her mouthpiece and osculating tongue-slaps in a flurry of brassy notes. "Blame Pericles", the CD's climactic track, has Zerang in proper percussive mode, albeit on metal snare drum. Stripped-down kit notwithstanding, his bull's eye targeting of the beat crosses patterns with Mallozzi's gamelan-like tones. Meanwhile, the latter's organ pipe pops bring quick-tongued buzzes from Ulher. Finally she snaps out a coda of honks and peeps on top of murmuring and hissing tape noise from the audio artist's palate.
Landscape: recognizable confirms that Mallozzi was more assertive, but not to the detriment of the overall sound, while Sputter replicates how well two committed improvisers can think and create in a recording studio. Ken Waxman (One Final Note)

First things first: this gonna be the first review in a serie of three of cd came out on Creative Sources the lowest common denominator of which is the fact they all feature the mighty miss Ulher on trumpet. "Landscape: recognizable" is much more acoustic than electro-acoustic (whatever it means), while Birgit holds back the voice of her instrument, rumorism marries the non-intrusive percussionism-rumorism of Michael Zerang, Lou Malozzi follows perfectly, it's hard to get who's doing what except for the noises/notes "tricks" emitted by the one-lady-horn section. It may sound contradictory but for those who are new to Creative Sources, imagine this "electro-acoustic" music sometimes gives the idea "concretism" reaches its point of ebullition thru improvisation. This cd in particular sounds like it's impro-jazz played without its traditional "dress", what do I mean? Simple, the basic idea evolves around some of the most avantgardist thoughts of Beefheart and Ornette Coleman but don't think the comparison explains it all. Improvisation without emitting classical "notes", but at the same time think of this cd as a "free jazz" ensamble with the antenna oriented toward the action/reaction rail. Impro after impro that "no-jazz" thing arives slowly at its climax (Taming the nobility, Blame Pericles) and the fact the songs become barely structured is nothing but an illusion. Her we've music where something is happening, music without music, somebody will define it "acoustic rumorism" but it would be just too easy. Andrea Ferraris (Chain DLK)

Creative Sources indeed. Ulher plays trumpet as a sound source, rather than a "musical" instrument.
So she's blowing, squeaking, sputtering, hissing, and like that. Zerang coaxes subtle sounds from various percussive objects, whistles, bird calls, etc. Mallozzi adds higher-tech input with his CDs, voice material, turntables, and microphones. Once in a while the trio gets a bit of a clamor going, but generally these sound concoctions are on the sparse side, with a backdrop so quiet that every nuance really stands out. Track lengths fall within the 6 - 9 minute range, which is about the right size for unearthly sound pieces like these. Great headphone material. Max Level

Is it possible to keep pet monsters in pots and bottles? That's what Ulher, Mallozzi and Zerang tried to achieve through their music, an unpredictable melange of electroacoustic fantasies which at times sound like a meeting between Pierre Henry and Dewey, Huey and Louie playing with the French acousmatic master's tapes while he's gone for a cup of coffee. Ulher - a constant record-releaser recently - spreads her ill-mannered trumpet textures all over the place, conjuring forth images of hilarious rebellion while incinerating whoever talks about "patterns". Her evolutions are exalted by Mallozzi and Zerang's strange world of birdcalls and deformed voices chattering upon unstable foundations of turntables and assorted percussion and objects. Variegated to the point of pre-insanity, nevertheless the sound sources are nicely used to create a very assimilable composite which appears as a spontaneous deconstruction of certainties by three artists who literally kill our boredom through their playing, the contortions of the pre-recorded voices do the rest, straining the reality of design until no one knows what will happen next. Massimo Ricci (Touching Extremes)

utwory:
1. an ancient scar on the terrestrial globe
2. what about the phoenicians?
3. miracles of bitumen
4. obscure days
5. taming the nobility
6. blame pericles
7. the landscape: still recognizable 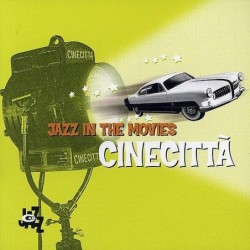 Cinecitta - Jazz In The Movies 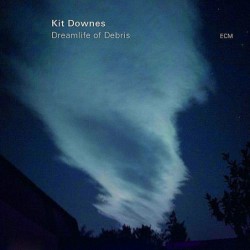 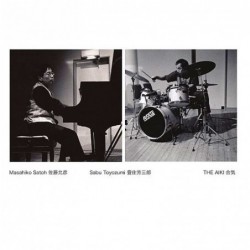